Einbroch, sometimes referred to as "The City of Steel," is one of the major cities in the Schwarzwald Republic. Heavily industrialized, densely populated and prosperous, Einbroch is truly the first modern city in the world of Midgard. But what is the price of progress? What trouble can be brewing in the big city?[1]

Adventurers can take the train to Einbech for a mere 200 Zeny.

The Schwarzwald Republic`s scientific community has long been a national source of pride. Juno, its capital city that majestically floats amongst the clouds, is a testament to its achievements in science, as well as ancient relic research. Countless brilliant innovators fill the pages of Schwarzwald's history, but perhaps one of the most influential figures is Lowin Ard Strahenstein, the scientist accredited with inventing the steam engine and starting the Schwarzwald Republic`s Industrial Age.

Steam engines were eventually mass produced and distributed all over the Republic, as they revolutionized transportation and the manufacturing industry. Recognizing the growing value of the resources used for manufacturing and fueling the steam engines, many wealthy merchants seized the opportunity to invest their capital in Einbech, a small mining town located near an abundant mineral supply southwest of Juno. Their financial support resulted in a surge in the mining industry and the growth of Einbech into a large village. Strahenstein made further innovations to his existing steam engine technology and introduced the high-pressure steam engine. The increased power output of these new engines made deep mining, the refinement of intensified iron, and large scale manufacturing possible. Now that this improved machinery existed, Einbech`s investors began pouring their money into an empty lot near Einbech, building factories to refine minerals mined in Einbech and manufacture a greater variety of products. As more people moved to this area and an extensive railroad network was built to connect it to Einbech, the manufacturing district rapidly developed into the modern city known as Einbroch.[2][3] 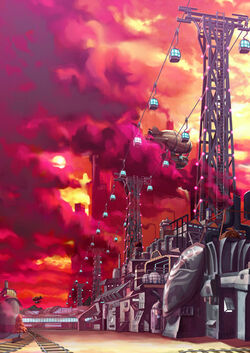