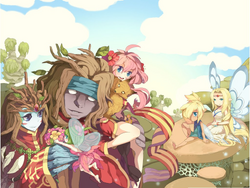 Laphines are a race of fairy-like people that reside in Alfheim. They are tasked with managing Yggdrasil and protecting the world tree's magic power.

They established their realm of Alfheim close to Asgard.

There exists two kinds of Laphines: Papang and Donas. Between the two variations, males typically have sharp points to their wings while females have curved edges to their wings.

Papang are normal Laphines with fair skin and small wings.

Laphine language does not have a particular name for it. At this point, the majority of the language is very indecipherable without the Ring of the Ancient Wise King.

Mayor Juns are kings that are chosen from Donas Laphines. Each Mayor Jun inherits the memories of all previous Mayor Juns in order to rule the Laphines with the best wisdom. It is from this process that Donas Laphines were born. Even though only Donas Laphines are considered for kingship, it is not unheard of for a Mayor Jun to be half Donas and half Papang.

Soldiers are military fighters that protect their fellow Laphines from harm. They also serve as escorts for important expeditions.