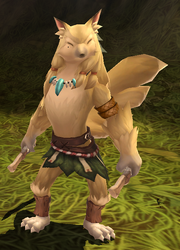 A Miho scout in RO2.

Mihos are a tribe of humanoid foxes that reside in Payon Forest. Their home is the Miho Tribe Village.

The Miho arose in the wake of Midgard's rebirth after the Ragnarök cataclysm. As such, their existence only spans about 300 years. They are said to be descended from Wolyahwa.

They lived peacefully alongside Normans for years until the Dimensional Gap recently opened up in the midst of the Payon Forest. Because of the gap's seemingly foreboding nature, the Miho Tribe were quick to blame its appearance on the Norman and have since become hostile towards any and all Norman.

The Miho look like upright foxes. It is unsure if there are females within the tribe as all Mihos have the same basic appearance. Higher ranked Mihos display differentiating war paint.

Miho are typically limited to Warriors.