Noels were once Elves, but have since evolved due to the demonic energies they absorbed from the final conflict with Freyja. They currently reside within the Garden of Yggdrasil.

Noels came about during the time of the Midgard battles. They were once Elves who battled alongside the Norman Race against the Goddess Freyja, in which they emerged victorious. However, after that, the Elves began to disappear after having absorbed the demon spells that were casted during the battle.

The Elves could only survive by absorbing spells and thus they started to grow black wings and tails on their backs and the symbol of the demon, horns, also appeared from their heads. Due to the transformation, the Norman Race started calling them Noels (no elves).

The Noel race was saved from extinction by a piece of Ymir, which contain pure and infinite spells, preventing the Noels from transforming into demons when they absorbed demon spells. Even though they could grow into adulthood, they spent their lives as children to reduce the need to consume more spells.[1] 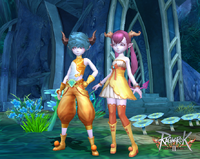 Noels are diminutive, much shorter than the average Norman. Both male and female Noel feature horns on their heads with the male's positioned vertically and the female's positioned horizontally.

Noels can take on the following 1st Class jobs:

Ellrs and Dimagoes can be seen in this old RO2 trailer.