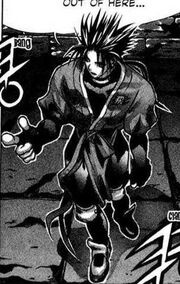 Chaos, minus his armor.

Normans are the main race of the world of Midgard. They are resilient, having survived one Ragnarök cataclysm.

(NOTE: It was not until the development of Ragnarok Online II that it was revealed the race is properly known as Normans.[1] However, the English release of the manhwa and most Ragnarok Online servers have already localized the race to Human.) 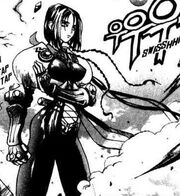 Fenris, as she initially appears in the manhwa.

In the beginning, Normans were not much more than cavemen, using primitive means to hunt and survive. It was not until elves came to Midgard that Normans began learning the basics of civilization from them. As a result, Normans became tenacious and greedy. In return for the elves' charity, the Normans allied with the Dwarfs and overran the elven kingdom of Geffenia. Before the Normans could conquer the realm as their own, the elves locked it away using powerful magic. The Normans were forced back to Midgard and began building their own cities and towns.

Normans mainly feature fair toned skin, although there are a few that display much darker tones (i.e. the Umbalans). Their hair can range across many spectrums of color.

Normans in the original version of RO2.

Normans start out as Novices and can change into the following 1st Class Jobs: