Rogues are the scourge of the desert that use advanced trickery to get what they want. Not content to just steal items and weapons, Rogues will strip their targets down to their underwear if necessary. They are not above vandalism either.

Rogues do not try to meet eyes with themselves. As people that had become free of work, seeing the recruitment announcement of Tristan III, Lord of Rune-Midgarts, they join the ranks of adventurers to test their abilities against monsters. Known as bad luck in a street alley, Rogues have the skills to strip weapons and armor before the other person could notice, with the ability to use daggers. Rogues also have the ability to automatically use various skills at the same time when attacking. If the opponent is strong, the opponent is weak, and when the opponent is weak, the opponent is incomprehensible. Will becomes anger, and the things in front of them will not be guaranteed their safety.[1]

Rogues work quickly with virtuosity and say they're the top thieves. By performing rigorous training with special exquisite skills, they are highly distinguished thieves that aren't limited by rules or restraints. They move freely around the land, as they are separate from all rules of society. Rogues will strengthen themselves by learning and stealing other techniques, sometimes stripping armor and weapons. To them, the rules of combat do not apply.[2] 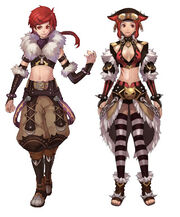 For their trickery and deception, only Normans are low enough to become Rogues.

Rogues can only equip gear designated as:

Rogues can use the following weapons:

Rogues can move on to become Shadow Chasers or transcend to Chaser.

Rogues can be further customized through the Master Level System.