Sorcerer are those that awakened by the powers inherited through ancient bloodlines or affinity with spirits.

Their affinity with nature helps them use the powers of nature freely, and summon spirits to aid them in battle or to heal their allies.[1] The Sorcerer is a Magician with the ability to summon an elemental, allowing the control of an element to attack targets by issuing commands such as "Attack Mode", "Defense Mode" or "Standby Mode" to prevent attacks, or to put a variety of buffs on friendlies in waiting mode. This has enabled the "Magician Classes" vulnerable to melee attacks to excel in melee combat, sometimes using physical attacks and occasionally magical attacks on both sides. "Spell Fist," "Killing Cloud," "Poison Burst," and "Strike" are used to strengthen the attack power of the weapon. Sorcerers also have a number of powerful skills, such as the Frozen Spell "Diamond Dust", which can be used to make a storm, a move worthy of an expert of magic.[2]

The Professors of Juno have long studied how to control the four elements of nature, but they eventually hit a seemingly insurmountable plateau. Normans were just not inherently powerful enough to fully wield the elements. They could bend the rules of nature, but were ultimately still governed by them.

Out of desperation, they sought knowledge from ancient magic books and secret records that described how new power could be lent to Normans from different entities. The professors became especially interested in communicating with the elemental fairies that were capable of fully wielding the power of the four elements. Several Professors started developing a new kind of communication system to interact with these fairies.

This system was finally developed after twenty years and many professors--especially those that reached the limits of existing magic research--raved about this groundbreaking system. When the first version of the Fairy Communication System was about to be released, over 300 Professors gathered to unveil its creation. When the first professor used the scientific communication system and made a contract with a Fire Fairy for the first time in the world, the academy world applauded him as the first Sorcerer. New Sorcerers soon appeared, one after another, forming an exclusive group of powerful magic practitioners.[3]

Thus far, only Normans have been known to be Sorcerers.

Sorcerers can only equip gear designated for:

Sorcerers can use the following weapons: 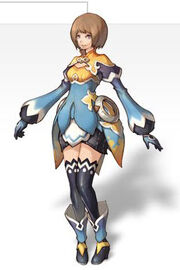 Sorcerers are the highest tier job for the Magician class.

Sorcerers can be further customized through the Master Level System.