Swordsman job classes are disciples and masters of the sword, which is their namesake. They are known to be able to take large amounts of damage without being defeated too easily.

While it's easy to learn the skills of a Swordsman, it's very difficult to master the Way of the Sword.

Swordsmen (and swordswomen) learn swordsmanship at a young age, growing their minds and bodies as the start being dedicated to the sword. This is where a true warrior is born.

Swordsmen are the masters of the sword as they are strong both offensively and defensively, conquering battlefields and providing protection for teammates. Swordsmen do not demonstrate physical strength unwillingly to their enemies, for that is not the way of a Swordsman.[1]

The swordsman looks forward to gain strength. With constantly devoted thoughts, he jumps into the world of adventure with his skill, his toughness, and his sturdy armor. He is from Izlude, a satellite city, and he is a person who is very knowledgeable and stubborn as a rugged person.

One day, an the announcement for the recruitment of adventurers came from Lord Tristan III, King of Rune-Midgarts. With the expectation that he will grow strong endlessly, he takes off with body and sword into the world of adventure.

Swordsman is a profession that has strong physical attack power and physical defense ability and is tough enough to be able to stand at the forefront of all characters and play a leadership role.[2] 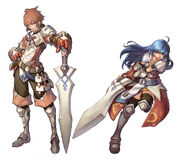 Thus far, only Normans have been known to be Swordsmen.

Swordsmen players can only equip gear designated for:

Swordsmen can utilize the following weapons:

Swordsmen (and Swordswomen) can choose to become either a Knight or a Crusader.

Swordsmen (and Swordswomen) can choose to become either a Warrior or a Knight.

Swordsman classes have exclusive mounts designated for them. Unlike other classes, Swordsman classes can attack from their mounts. The main mount is the Peco Peco, although Swordsmen can later gain access to the Ferus or the Gryphon depending on what job path they take.