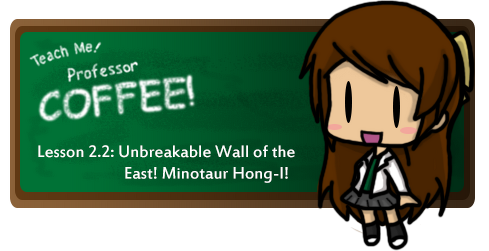 Extremely similar to the Chong-I fight, save for different buffs and debuffs. Where Chong-I focused entirely on increasing it's attack power, Hong-I has many defensive buffs that reduce the damage it takes, so make sure your group has decent DPS to make up for it. 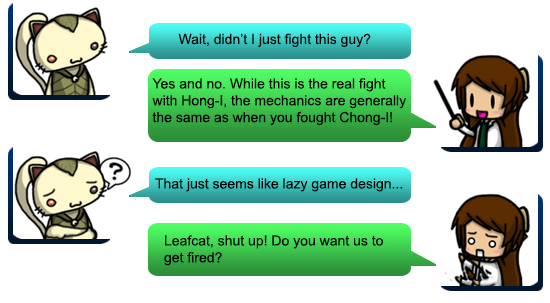 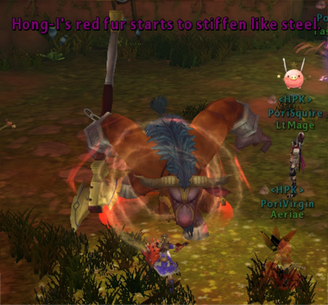 Hong-I will let out a roar, buffing himself with a 20% increase to his defense rate.

"Hong-I dents the armor with the handle of his axe." 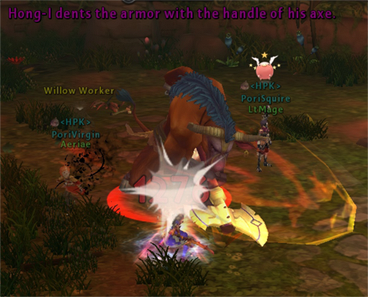 Hong-I will attack the threat holder with the end of his axe, slowing their movement speed by 30%.

"Hong-I's axe releases a strong shock wave"
Hong-I will strike the ground with his axe, putting an armor rip (20% defense rate decrease) debuff on everybody in the party. 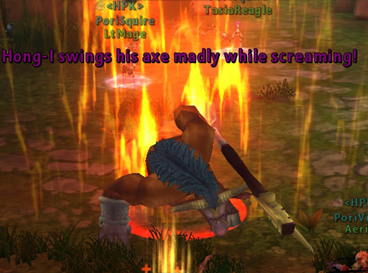 Like Chong-I, Hong-I will create a tornado where he cast this skill. It's smaller than Hong-I's, however, it will slightly move in a circle around the spot it was cast. Standing in the tornado will cause a hemmorhage (bleed) debuff that ticks for about 300 hp every 2 seconds.
Hong-I will cast this tornado three times. First at 750k, second at 445k, and third at 180k.

Roar
Hong-I will roar at the threat holder, with no message indication. This will do no damage, but it'll give them a curse of weakness debuff (20% decrease in atk and matk power), and decrease their movement speed by 50% for a few seconds.

Summon Savage Brother/Bebe
At about 650k hp, Hong-I will summon about 6 or 7 Savage Brothers accompanied by a Savage bebe. The Savage Brothers can deal decent damage if ignored, but like Zadoras, they're pretty weak and can be dealt with fairly quickly. Defeating the Savage Bebe will cause a friendly Angry Mother Savage NPC to spawn and help with the fight. Shortly after, a second friendly NPC, Furious Henpecked Savage, will spawn in to help as well.

Summon Chong-I
Like with the previous fight, Hong-I will summon a slightly weaker version of Chong-I around 450k to assist in the fight.

If you followed the order of this guide and fought Chong-I first, this fight is nearly identical with a few minor changes. Your group should be familiar by now with letting the main tank hold threat and control the positioning on Hong-I while the rest of the group focuses on DPS. As mentioned at the start of the guide, Hong-I focuses more on defense and damage reduction over dealing more damage to the group, so make sure your group has good DPS. It shouldn't be too big an issue meeting the 10 minute enrage timer unless your group is derping around or just has no main damage dealers at all. The first tornado will come around the 750k hp mark. It's much smaller than Chong-I's, but it's mobile, and will cause a bleed debuff if you stand in it too long. Hong-I tends to throw a movement speed debuff on you from one of his other attacks right before casting the tornado, so make sure you don't react too late otherwise you'll be eating a bunch of unnecessary damage. At 650k hp, he'll spawn a set of savage brothers, and a savage bebe. The savage brothers are the bigger threat, and tend to swarm one player as soon as they spawn. An AoE or two should be more than enough to take out the entire pack. If you defeat the savage bebe, the Angry Mother Savage will spawn in and provide extra DPS. Shortly after, the Furious Henpecked Savage will spawn in as well. Just as Zadorak gave the player a 100 attack increase buff, if you stack on the Furious Henpecked Savage, he'll give the player a 150 defense increase buff staying in theme with the fight. At 450k hp, Chong-I will spawn in to assist Hong-I. Like the previous fight, have the off tank grab Chong-I and tank him off to the side while the rest of the group focuses their DPS on one of the two minotaurs before switching to the other. Once more, there will be two more tornadoes at 445k hp and 180k hp respectively. It's relatively easy, and if you were able to manage through the Chong-I fight, the Hong-I fight pretty much going through the same motions once more.

Comments that use inappropriate language, are irrelevant, and/or are inflammatory will be deleted. Please contact a moderator or admin to report such comments.

Discussions and comments about the Ragnarok Wiki and articles should be directed to the forums. Thank you for your cooperation.