My review of the official Ragnarok Online USB mug warmer, which is currently available from National Console Support, Inc. I recommend snatching a set if it appeals to you as this set hasn't been available since it was released around 2007. The price is pretty fair at $30.90 and it ships from New York, USA. I had mine shipped via the media mail option and it came in one piece. 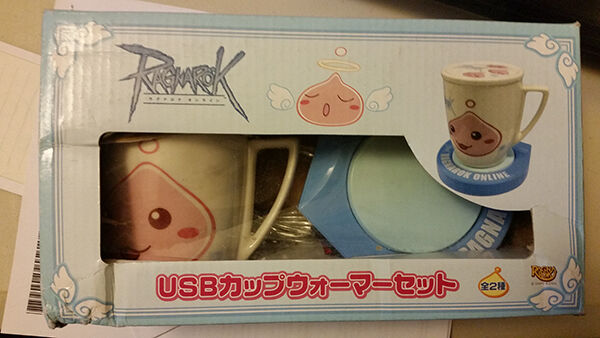 Considering how this set hasn't been available for years, I kind of expected that this likely came from some random warehouse that just happened to have a bunch of these collecting dust. (It came in another box that had enough stuff to cushion it so the damage was likely done at wherever they stored it.) The box looks pretty old, like it's been sitting under some heavy merchandise since 2007. NCSX claims that everything offered in their store is new and unused; it would be pretty bad business for them to send me something used. The original tape and stuff are still on so although it may not be brand-spankin' new, it's not-used new. I guess that's good enough, right? 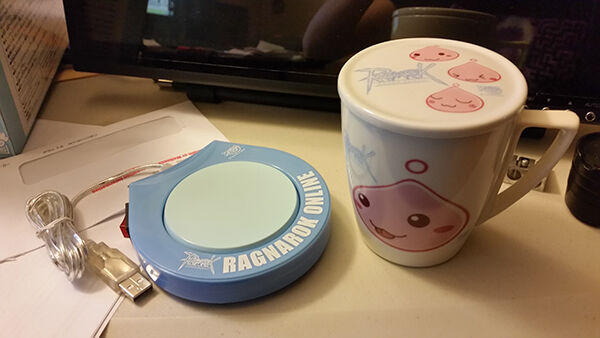 Everything else looks to be in mint condition. Wiring looks okay and there's no scratches on the mug, lid, or the warmer itself. The mug and lid feel like they were made with some heavy-duty ceramic; they've got some weight to them, I guess so it doesn't get knocked over easily. I still wouldn't use these near my computer so I decided to take them for a test drive in the kitchen instead. 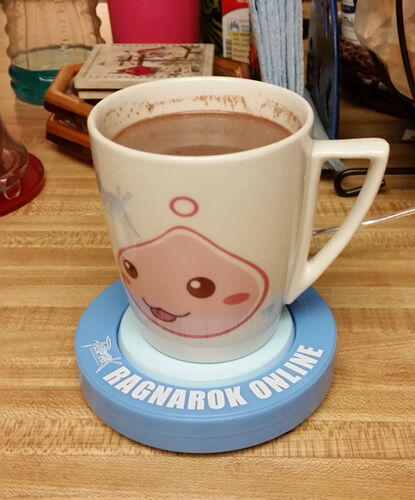 Since the warmer was meant to be used with a computer, the manufacturer didn't think to include an outlet adapter so I used the outlet adapter for my Samsung Galaxy S5's charger. (I think any USB-outlet adapter should work regardless.) The red on/off button doesn't light up when turned on, which is rather odd. Kind of important to know if it's on or not, since it's the difference between getting burned and not getting burned. I contacted NCSX about it and they said that the switch never had a light (they apparently use it themselves so they have tested it when they first got it in 2007). Chalk it up to weird design choice by the manufacturer then.

The warmer heats up fairly quickly (within minutes). The temperature of the heating element feels fairly warm when I put my hand above it. I ran it for 2 hours and it did keep my hot cocoa pretty warm (not lukewarm, but closer to its initial temperature when I cooked it on the stove). Since it's said that the heating element is hot enough to melt butter, I'm going take its word for it and advise caution with the warmer whether you think it's hot or not.

The lid is not secured on the mug since your drink needs air to breathe if it's being kept heated by the warmer. It's meant to rest on the mug to keep your drink warm in between sips so if you don't keep a lid on it, it won't be as warm as it would be with the lid on.

Overall, this set is pretty nice. The mug and lid are well-made and the warmer does its job. Although I mainly bought this because I was curious if it actually works, not only was my curiosity satisfied but now I have a neat piece of RO history in my possession. I'm disappointed the box wasn't in great condition, but at least the stuff inside works.

Comments that use inappropriate language, are irrelevant, and/or are inflammatory will be deleted. Please contact a moderator or admin to report such comments.

Discussions and comments about the Ragnarok Wiki and articles should be directed to the forums. Thank you for your cooperation.