Wanderers are the free spirits that don’t want to be restricted by anything or anyone. They desire true freedom and let the wind guide them. They love nature and worship the grace of the gods.[1] Wanderers sing songs that are more than just simple songs and so, because of the magic in the voices themselves, the songs and choruses they sing are like magic. Unlike Bard/Dancer or Clown/Gypsy, which can only play singly, Wanderer has the ability to instantly activate the effect of a song or chorus so she doesn't have to stop in one place and wait for another performer. Also, if you learn the skill "Lesson", you can use song and chorus while playing, so you have the ability to play two different effects at the same time. In addition, the chorus skill has enabled the more powerful Wanderers/Minstrels to be more powerful if they belong to the same party. The various effects of numerous songs and choruses will be more effective in hunting as well as in siege and masterpieces.[2]

Most Wanderers travel from town to town, making a living with their alluring dances. Not all of them were naturally gifted in dancing and the very first Wanderer, Krazi, was such a person. Her wink made people grimace and her very voice dispersed crowds instead of attracting them. Krazi, the talentless Dancer, wandered alone until she met Nosound, a deaf Bard, who wanted to travel together with her.

Nosound didn't seem to mind Krazi's awkward dance moves. He stood by her and sung his beautiful songs to cheer her up. Touched by his kindness and friendship, Krazi danced and sang harder than ever. Her efforts, however, couldn't compensate for her lack of talent: her shrieking voice created loud discord instead of harmony and her dance moves frightened audiences instead of entertaining them. Nevertheless, she was happy to stay with him and he felt the same for her.

Fate put an end to their happiness when Surt broke out of his seal in Morocc. He devastated everything in the desert town and Nosound, who was singing in the center of Morocc while waiting for Krazi, was killed in his rampage. As soon as Krazi heard about Nosound's death, she wailed in agony and the sound of her anguish collapsed the buildings near her. Krazi, after awakening as a Wanderer, entered the Ash Vacuum to pursue Surt. She is teaching her powerful sound wave skills to other Dancers and Gypsies, waiting for just the right time to avenge Nosound's death.[3]

Only female Normans can become Wanderers. 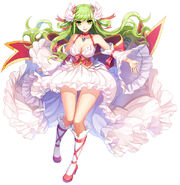 Wanderers can only equip gear designated as:

Wanderers can utilize the following weapons:

Wanderers are the highest tier on this job branch and cannot advance any farther.